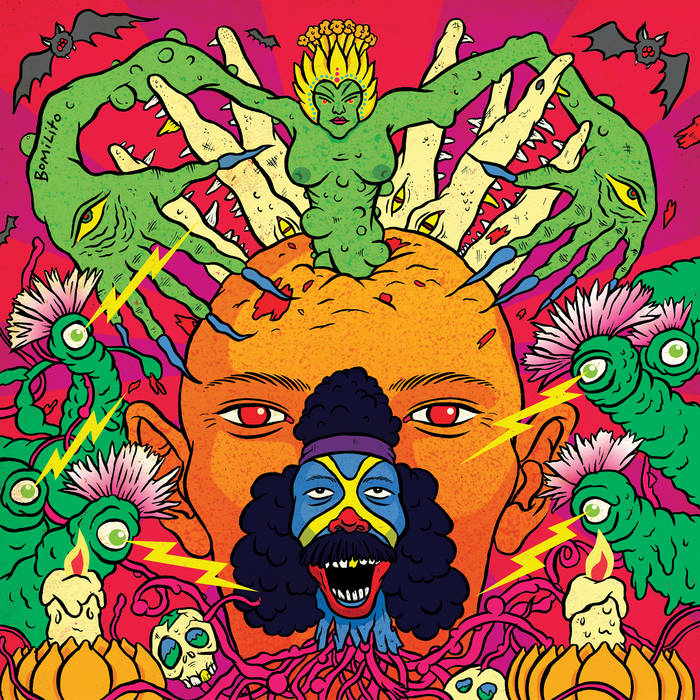 Jerri_Noiseburger<=_=> The B side of this record is beautiful. Like a glowing cathedral of imagination. Really sit down and let it wash over you like a radiating buddha monk flying through a purple neon orange gelato sky. I tried to synch the lp to the The Boxer's Omen and my head almost exploded. Acid Kung Fu!11 Favorite track: Spring Snow.

Mo - The Demon was recorded at Leeds college of music between November 2017 – February 2018. The basis of the album was to record an imaginary soundtrack to the Shaw Brothers batshit psychedicrazy Kung Fu horror ‘The Boxer’s Omen’ aka MO or demon.

The story is an everyday one.

After a Hong Kong kickboxer is paralysed by a cheating Thai competitor, his mobster brother vows revenge and journeys to Thailand for a duel. Along the way, our hero is met by bizarre visions, entered into a Buddhist monastery, and begins a quest to save the soul of a deceased Monk (his twin brother in a past life) who died at the hands of a powerful black magician.

We’ve all been there. However the movie descends into a kind of spiritual Jodorowsky mushroom fest that is completely deranged and is therefore one of those perfect midnight movies.

So we got free studio time at LCM in November and just went ‘fuck it’ lets make an imaginary soundtrack in homage to such a great movie.

Taking inspiration from all the things musical that have inspired us over the years. Berlin era Bowie, Prime Magazine circa ‘Correct Use Of Soap’, Electric Funk Miles, ‘Caravanserai’ Santana, Embryo and god knows what else (it doesn’t really matter as it all ends up Earthling Society), we think we’ve made a groovy as fuck concept.

Then, Invited back in February we decided to record 2 stand alone pieces ‘Spring Snow’ and ‘Jetavina Grove’ and bring all our space rock elements and psych raga back into the fray. Throw in some super cool Korean vocals courtesy of Bomi Seo of Tirikiliatops and run the guitars through a harmonizer H910 (as used by Visconti on Low an Heroes) and its the perfect swansong to the last 14 years of playing live and recording together.