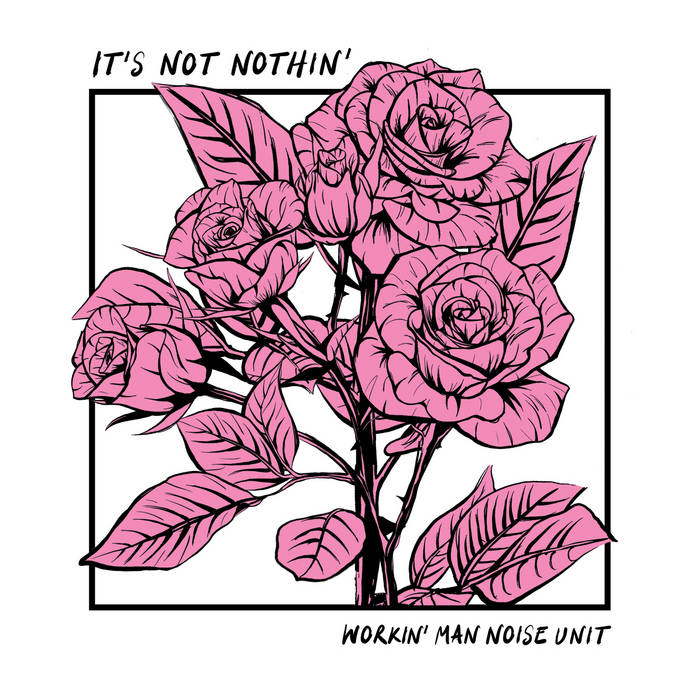 eldudowski The. Best. Band. In. The. World. Favorite track: Turn It Off.

Workin’ Man Noise Unit finally return with their second album proper ‘It’s Not Nothin’, the eagerly awaited follow up to ‘Play Loud’ which was released in 2015 to great acclaim ...

‘Play Loud is packed with no-nonsense meat-feast riffs accompanied by a swirling background breeze. ‘Yeah, I Was Hypnotized’ hints towards a potential knack for Torche-esque poppiness before it audaciously decelerates to a sludgier wallow. That the band’s rowdy dual vocals start to remind you of Fugazi, which only sweetens the whole damn deal’ (The Quietus)

“We must celebrate this most punctual of albums which hits a nerve left abandoned for too long. It’s sheer veracity is a blast of fresh air and places itself as a prime piece of rock and roll from these shores. We need bands like this, they show us that it doesn’t have to be all humdrum seriousness” (Artrocker)

“Reading's own noiseniks, Workin' Man Noise Unit infuse the whole fucking thing with a love of Albini, Jesus Lizard, and Fugazi. They are agitated from start to finish as they pour their entire bodily fluids into new long-player, the aptly titled Play Loud. This is agitated, cathartic rock played at a nihilistic intensity” (Soundblab)

“As the band has progressed, they’ve been edging into an area that is more of the 70’s riff-rock vein but dressed up with a larger amount of distortion/noise, kind reminiscent to stuff like Torche, Fu Manchu, Kyuss, and Karp. If that’s your cup of tea, then Workin’ Man Noise Unit will likely be of interest as they are certainly capable of hanging in there with the more prominent bands of the genre and their mantra of “play loud” ends up being more than just for show” (Built On A Weak Spot)

Hello. Our crummy band is called WORKIN' MAN NOISE UNIT. Apostrophe, no G. (Yeah, all the good names were taken, OK) From Reading, UK. We are drums, noise, bass, guitar, vocals, sound, energy, bad jokes, the smell of stale beer on sticky floors. Hit a few chords, see how it sounds. Live, tonight, not sold out.

WORKIN’ MAN NOISE UNIT started in 2010. Since then we’ve played on stages the size of a postage stamp and smaller than that too. And the back rooms of pubs and clubs and restaurants and record stores and pizza establishments and stinking practice rooms. In arts centres and galleries and warehouses and member-run community spaces. In dank basements, a flat in a shopping centre, an old bank vault, a crypt, a bicycle shop. Etc. Plus a few respectable venues accidentally allowed us in to make a racket along the way too.

And we’re still doing it because making music with your mates is fucking ace, isn’t it?

It’s been a good ride so far. We’ve heard great music and met great people. Can no longer hold a conversation in a loud room because of screaming tinnitus but it’s probably been worth it. Pardon?

Our new record is called IT’S NOT NOTHIN’ and it has 11 songs and it’s out on the top notch Riot Season Records. It was recorded, mixed and mastered by Wayne Adams at BearBitesHorse. We reckon he even managed to make us sound half-decent, despite our best efforts. Have a listen to it if you fancy.

And then we’re getting back in a van loaded full of half-broken amps and weighed down by LPs and it all carries on. Dreaming of hot meals and bladder control. The motorway again. Set lists written on the back of old flyers and wetherspoons receipts. Snyder’s hot buffalo wing pretzel pieces, a.k.a. gold medals, washed down with buckfast. And how nice are chips? Well nice.