IAO Chant From The Melting Paraiso Underground Freak Out 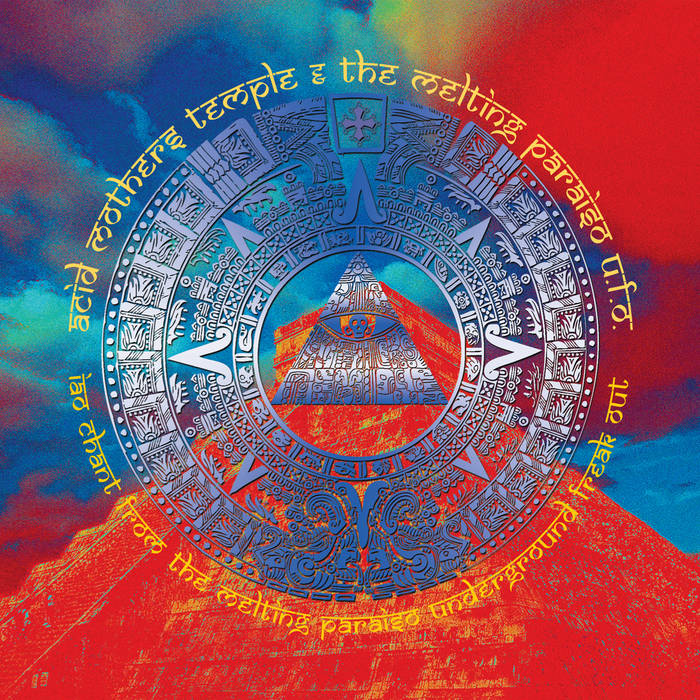 Caley Ross I love being able to drone out to music at work, and repetitive psychedelia is perfect for it... Favorite track: OM Riff From The Melting Paraiso U.F.O. (Part 1).

'IAO Chant From The Melting Paraiso Underground Freak Out' finds the band revisiting the past and once again taking Gong's infamous 'Om Riff/Master Builder' to soaring new heights. This is a completely new version/recorded in a new Japan, one still coming to terms with recent catastrophic events. Split into two almost equal parts, 'OM Riff From The Melting Paraiso U.F.O. Parts 1 & 2' this is the sound of a reinvigorated AMT playing some of their most up-tempo and groove based music for some time. The laid back nature of last years acclaimed 'The Ripper At The Heaven's Gates Of Dark' opus is put firmly aside, in favour of some heads down cosmic riff heavy freak-out.

Taking the original classic work as the backbone, and stretching it out to new heights, taking on an almost Krautrock sense of repetition and sonic attack. This is definitely more akin to the much loved AMT live sound, and should appeal not only to long time AMT converts but pot headed pixies and a new generation discovering what guitar based music is all about too. File under Acid Mothers Temple, Gong, Krautrock, Psychedelia, etc etc

Available as a CD packaged in card gatefold sleeve (initial pressing only) and vinyl LP limited to 500 copies worldwide and pressed on suitably swanky coloured wax.

Acid Mothers Temple & The Melting Paraiso U.F.O. - at the time of this recording were :

Featuring Gary Bartz, 5 years of Rhythm Section Intl and an LP of the week by Nicolas Jaar